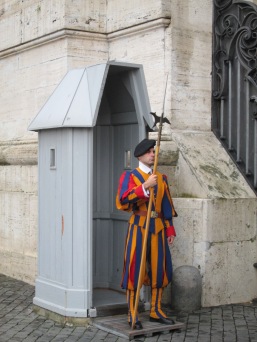 Question: How long have Swiss Guards been at the Vatican?

Answer: Exactly five hundred and eleven years. At the request of Pope Julius II, one hundred and fifty of them marched through the Porta del Popolo on January 22nd, 1506, led by Captain Kaspar of Silenen in the Canton of Uri. Just as Vatican City is the world’s smallest sovereign state, the Swiss Guards are the world’s smallest army, protecting all within it, as well as being directly responsible for the security of the Apostolic Palace and the safety of the Pope.

Despite the medieval uniforms, they are highly trained modern soldiers, capable of taking on any threat that arises. (When my son and I were there three months ago, they were also proficient at handing infants and toddlers up to the Pope for a blessing.)

For more about them, visit: