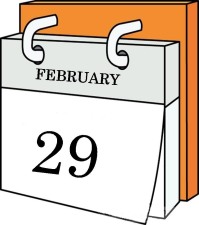 And what is a leapling? Well, it’s a person born on a leap day (February 29th, which only comes around every four years).
I personally only know one leapling, who is now thirty-six. Or nine, if you go by actual February 29th celebrations. When leaplings can officially celebrate their birthdays in common (non-leap years) depends on where they live. In China and New Zealand, for example, it’s February 28th, but in the UK, it’s March 1st.
Some historic leaplings are: Pope Paul III (born February 29th, 1468), composer Gioacchino Rossini (born February 29th, 1792), Indian Prime Minister Morarji Desai (born February 29th, 1896), El Salvadorian president Carlos Humberto Romero and American singer Dinah Shore (born February 29th, 1916). There was also James Milne Wilson, the eighth premier of Tasmania, who was not only born on a leap day (1812), but died on one, too (1880).
In addition to historic births, February 29th was also the date the first arrests of the Salem Witch Trials were made (1692), the date Gone With The Wind had multiple wins at the Academy Awards (1940) and the date hockey player Gordie Howe scored his 800th goal (1980).
And young marriage-shy men will have to watch out that it doesn’t become historic for them because, a tradition in existence since about the fifth century, allows a woman to propose to a man in a leap year and, if he refuses, can demand cash or clothing.