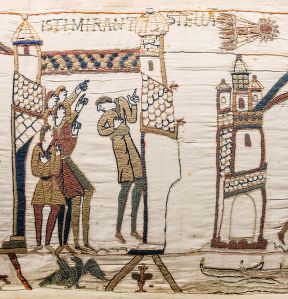 A periodic comet is one that shows up at regular intervals. One of the most famous is Halley’s Comet, depicted above in Scene 32 of the Bayeux Tapestry, which commemorates The Battle of Hastings (1066). This comet was named for the eighteenth-century astronomer, Edmund Halley. It had been popping up for millennia, but it was named for Halley because he was the one who realized it was the same comet coming back each time and predicted it would do so again in 1758, which it did.

From then on, people knew to expect it every seventy-five to seventy-six years. One of the times it turned up was in October, 1835, just a few weeks before the birth of a baby boy named Samuel Langhorne Clemens (November 30th, 1835). In 1909, Sam Clemens (by then, better known as Mark Twain), said he had come into the world with Halley’s Comet, and would go out when it returned. The comet returned on April 20th, 1910, and Clemens died the very next day.
For more about this comet, visit:
http://io9.com/5637815/how-halleys-comet-sightings-changed-history-over-the-past-2500-years
http://www.space.com/19878-halleys-comet.html
Its next scheduled appearance is in 2061.