HISTORIC PHOTO: “WAIT FOR ME, DADDY!” 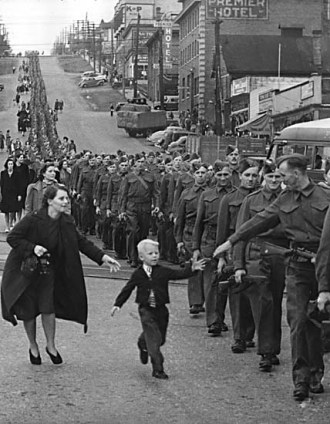 What does a kid have to do to go down in history? Well, all five-year-old Warren “Whitey” Bernard had to do was run down a street. On October 1st, 1940, photographer Claude P. Dettloff was standing on a corner in New Westminster, British Columbia, Canada trying to get a good shot of the B.C. Regiment as they marched towards the train station that would take them off to war. What he got, was a once-in-a-lifetime photo that would appear in magazines and newspapers everywhere. It also hung in schools all over British Columbia, enabling Whitey’s wife-to-be, Ruby Johnson, to see him years before they actually met.
Now seventy-nine, Whitey Bernard doesn’t remember calling out, “Wait for me, Daddy!”, but a soldier marching with Whitey’s father, Private Jack Bernard, later said that he did. He does remember all the attention he got once the photo went, in modern terms, ‘viral’. The military even used him in war bond drives, during which he met celebrities like ventriloquist Edgar Bergen. An appeal from the now-famous little boy asking people to help bring his Daddy home was hard to resist.
Happily, Jack Bernard did come home, and lived to see his son grow up and become, first, an alderman, and then the mayor of Tofino, the city in which he now resides.

A photo of their reunion at the CN station (also by Claude Dettloff) can be found at:

and an interview with Whitey at: http://www.edmontonjournal.com/news/vancouver/Wait+Daddy+Whitey+Bernard+right+right+place+right+time/10255997/story.html.

The interview was in connection with a sculpted recreation of his “Wait For Me, Daddy”photo, a sculpture that  was unveiled at Hyack Square in New Westminster just a few weeks ago. The Canadian government has also issued a commemorative stamp. 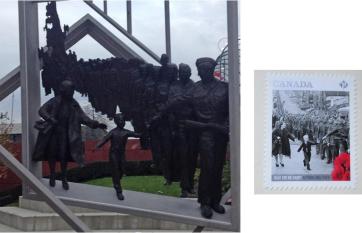