My latest book, Generations Five, is the prequel for the five-book Time Rose Series that focusses on the time trips of the Wolverton family’s fifth Generation. 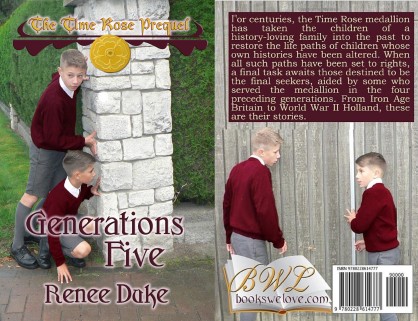 The other books are:

Back Cover Blurb: What happened to the two young princes who disappeared from the Tower of London over five hundred years ago is still quite a mystery. A mystery Dane and Paige Marchand and their cousin, Jack Taisley, can’t help wondering about after taking on roles in a medieval documentary for Dane and Paige’s filmmaker father. But when an ancient medallion transports them back to the fifteenth century and brings them into contact with the very princes the boys have been playing, they have a chance to learn the truth about the mysterious disappearance of young King Edward the Fifth and his brother Richard, Duke of York. Finding the answer could prove a bit risky, especially if the person responsible for the princes’ disappearance decides it might be a good idea to have their new friends disappear as well.

Back Cover Blurb: On this trip into the past, the Time Rose medallion takes Paige, Dane, and Jack to Victorian London and places them in the company of two street-wise young mudlarks. Life is very hard for Hetty and Pip, but Hetty is leery of seeking help from Dr. Barnardo or the other social reformers of the day, all of whom who would likely separate her from her younger brother. The Time Rose Travellers think they have a way of getting around that little problem, but a bigger one awaits. Jack the Ripper’s grisly attacks on women in the East End have the whole city on edge, and the blood-splattered man Hetty and Pip came across late one night doesn’t want any witnesses on the loose.

Back Cover Blurb: The discovery of an old book provides more information on the medallion, but since Paige and Dane will soon be returning to Canada, it will be several months before they can make another time trip with their English cousin, Jack. Then, amidst all the preparations for Grantie Etta’s one hundred and fifth birthday party, strange things start to happen. As a result Jack, too, must go to Canada. Once there, it soon becomes apparent that the only way for the Time Rose Travellers to stop the increasingly distressing alterations to their modern-day lives is to venture far into the Okanagan Valley’s past and locate the mysterious, elusive, syilx girl who has the legendary Arcanus Piece.

Back Cover Blurb: On Paige, Dane, and Jack’s fourth time trip, the medallion connects them with children living in Pre-WW II Germany. One, Hani, has Down Syndrome. Another, Nicko, is a gypsy. The Time Rose Travellers know the Nazi regime will soon begin persecuting such ‘undesirables’, but keeping Hani and Nicko from becoming victims isn’t going to be easy. Plagued by enemies from their own time, and not even sure who it is they’re supposed to be helping, they’re meeting with resistance from Nicko, and open hostility from Hani’s sister Marta, an ardent member of the Hitler Youth.

Back Cover Blurb: The medallion has found the one it seeks. In Italy to attend a family wedding, Paige, Dane, and Jack’s final time trip takes them to a waiting Varteni, who is living in Herculaneum in the path of an already rumbling Mt. Vesuvius. But getting Varteni and her two young charges to safety is the least of their worries. They’re not the only ones to have finally located her. Their nemesis, Khatcheres, has too, and is preparing to move against her and seize control of Time. To defeat him, the Line of the Restorer must unite and call upon every resource available. (Placing Generations One to Four back in the game)

For more on all my books, visit: https://www.renee-duke.com/.