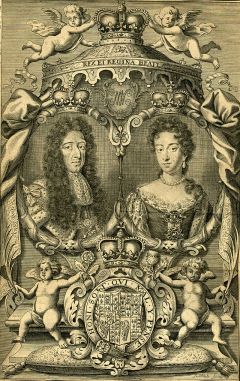 After a son was born to the (nominally) Protestant English king, James II, and his (far from nominally) Catholic queen, Mary of Modena, on June 10th, 1688, England could have been looking at a return to the Catholic/Protestant thing that had caused chaos throughout the land during the reigns of Mary I and Elizabeth I and, later, the Civil War. Parliament didn’t relish the prospect so, on January 22nd, 1689 the crown was offered to James’s daughter Mary and her husband William, Prince of Orange. Provided they agreed to some conditions laid out in a Bill of Rights that barred Roman Catholics from the throne (no more of that papist stuff, thank you) and limited their political power (no more of that Divine Right nonsense, either).