Trolls. What do you imagine? Maybe something like the big uglies pictured here. In my Witches of Galdorheim series, I wanted a cave-dwelling bunch of uglies, but dwarves didn’t seem right for my book. Then I started hearing music inside my head. You know how that goes, right? It builds and builds until it has you screaming in frustration, willing to even listen to some other music to at least swamp the tormenting sound.

But before I could find a MP3 file of “Henry the VIIIth” by Herman’s Hermits, I stopped and listened. My muse was whacking me in the head via earworm. The music was Grieg’s Hall of the Mountain King from the Peer Gynt Suite. Duh. Trolls.

Despite the canards on trolls from the likes of Artemis Fowl or Pratchett’s Discworld, I thought they could be heroic if given sufficient ale.

A troll is a fearsome member of a mythical race from Norse mythology. Originally more or less the Nordic equivalents of giants, although often smaller in size, the different depictions have come to range from the fiendish giants – similar to the ogres of England – to a devious, more human-like folk of the wilderness, living underground in hills, caves or mounds.

Hey! They’re not all flesh-eating giants who turn to stone in the sunlight. Some are devious little guys who live in wilderness areas (no doubt protecting endangered magical species).

In Bad Spelling, Kat and her smart-aleck half-brother, Rune, (also happens to be a vampire, but has absolutely no resemblance to the Twilight guy except they’re both cute as hell) are directed by Kat’s flash-frozen dad (Rune calls him a pop-sicle) to visit the Troll King. At the Hall, she requests assistance from King Ole, the Norwegian Troll King. He arranges for her and Rune to ride the Trollercoaster, which starts in Norway and ends up in the Ural Mountains. From there Kat, Rune, and a changeling troll named Andy travel to Siberia to find Kat’s family.

Clearly, trolls are good. They are nice, helpful, cheerful, and sing fairly well too. Yet aspersions continue to be cast upon these misunderstood creatures. Shame on all of you for making them the bad guys all these years! 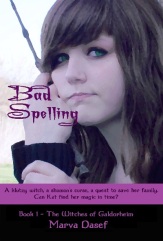 A klutzy witch, a shaman’s curse, a quest to save her family. Can Kat find her magic in time? If you’re a witch living on a remote arctic island, and the entire island runs on magic, lacking magical skills is not just an inconvenience, it can be a matter of life and death–or, at least, a darn good reason to run away from home. Katrina’s spells don’t just fizzle; they backfire with spectacular results, oftentimes involving green goo. A failure as a witch, Kat decides to run away and find her dead father’s non-magical family. But before she can, she stumbles onto why her magic is out of whack: a curse from a Siberian shaman. The young witch, accompanied by her half-vampire brother, must travel to the Hall of the Mountain King and the farthest reaches of Siberia to regain her magic, dodging attacks by the shaman along the way.

Kat ran to where her brother and the three trolls faced each other. The trolls stood shoulder to shoulder, their big, splayed feet firmly planted in front of the footbridge. They bared their chunky yellow teeth and growled at Rune. Although hardly reaching Rune’s shoulder, they each outweighed him. Clearly, the trolls did not intend to let him cross. Looking up and down the streamlet, Kat wondered at their careful guarding of the bridge. Kind of silly, she thought, since anyone could easily step across the rivulet without even getting wet feet. She wondered if these were children, given their short stature. However, their long knives looked very grown up.

Enunciating each word, Rune held his hands out to show they were empty. Kat had no idea what her brother was saying, since Rune was speaking Old Runish. Except for a few spell words, Kat didn’t understand the ancient tongue.

Evidently, neither did the trolls. Rune spoke again, louder this time, and took one slow step forward. At this move, the troll on the left lunged at them, jabbing at Rune with his knife. Rune sidestepped the rush, and the troll, taken off balance, stumbled and fell flat on his face. Kat stepped over the troll and grasped his arm but only caught hold of his sleeve. He screamed and pushed her away. The other two trolls ran at her with their knives raised, yelling as they advanced.

Rune stuck out his foot and tripped the middle troll. The last troll standing went after Rune. The young warlock threw up his hands, arms crossed to fend off the attack. A bright red light arced from his hands to hit the charging troll in the face. The troll dropped his knife and fell to the ground, screaming and rolling around with his hands pressed over his eyes. Rune snatched up the knife and held it to the middle troll’s neck. Kat sat on the one she grabbed, pulling the knife from his flailing hand. The recipient of Rune’s flash attack kept his hands over his eyes.

Rune spoke again in Old Runish, shouting to make himself heard. It didn’t do any good; the trolls all continued screaming and squealing at the top of their lungs.

The thrashing troll froze then turned his cumbersome head toward her.

“You can speak our language!” He slapped the troll nearest to him, who abruptly stopped screaming. The one whose neck Rune held the knife to spread his fingers to peek at Rune and Kat.

Rune released the troll and stood up, looking a little sheepish. “I just assumed—” He stopped then shook his head.

Kat crouched on her knees next to one of the trolls lying on the ground and patted him on the shoulder. “We mean you no harm. We’re Wiccans from Galdorheim. Maybe you’ve heard of it?”

Slowly, the trolls climbed to their feet, looked at Kat, then at each other. The three trolls huddled, conferring together. Kat heard a murmur but couldn’t make out what they said.

Kat continued, searching for something to say. “My Aunt Thordis…” Three pairs of troll eyes turned to her and opened wide. They stared at Kat. The middle troll elbowed the one on his left, who giggled. The troll on the right gave a great whoop of laughter then slapped the middle troll on the back. All three trolls broke into huge guffaws and ended up leaning on each other, wiping tears from their eyes. Rune and Kat stared open-mouthed.