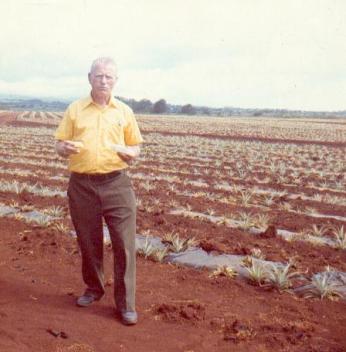 Though practically synonymous with Hawaii, pineapples weren’t grown there until 1813, the first crop being planted on January 11th of that year. They actually originated in South America (specifically, Paraguay and Southern Brazil), from whence they travelled throughout the continent and into the West Indies. They were brought to Hawaii by Don Francisco de Paula y Marin, Spanish advisor to Hawaii’s monarch, King Kamehameha.

That’s my father, above, sampling one on a Hawaiian pineapple farm in 1973. He stopped off in Hawaii on his way back from visiting his father in New Zealand. Though in touch by letter and tape recordings, I never really knew my paternal grandparents who emigrated to NZ just after the birth of my second brother (who claims they took one look at him and left the country). From the look on Dad’s face, that pineapple must have been a bit on the sour side.