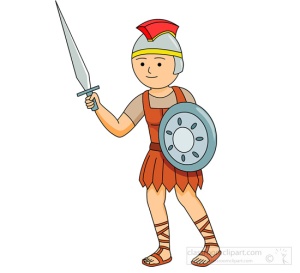 Since the last book in my Middle Grade/YA time travel series (Time Rose Book 5: The Volcanic Rose) is set in Ancient Rome, this month’s birthday theme is – Ancient Rome! To really get in the swing of things, the birthday boy or girl and his/her guests should go by Roman version of their names throughout the party, which, for younger kids, could be as simple as modifying their own names. For example a boy named Kyle whose father’s name is Bradley and whose surname is Trent could become Trentus Bradlius Kylus, while his sister Ashlyn would be Bradlia Ashlynia. (Girls did not usually rate a praenomen). For older kids and teens, you can get more elaborate (and authentic) by having them choose real Roman names.

Kids might find togas cumbersome, so tunics or robes will suffice.

And if you do want to opt for togas:

If your local shops don’t carry anything that fits this theme, try:

Reclining to eat in the famous upper class Roman fashion might not be the best idea for younger kids, but older ones should be able to handle it.

As always, be mindful of guests’ allergies & religious observances.

Other Fruit, such as apples, pears, plums, pomegranates, and, if you chosen timeline is during the Roman Principate (27 BC to 284 AD), cherries & oranges. (The Romans didn’t have them before then.)

Fig Newton Bars and/or Date Squares (as opposed to plain old figs and/or dates, but you can try those if you think your young guests will eat them)

Cold Meats such as ham and salami (the upper class Roman favourite, stuffed dormice, are unlikely to find favour with the modern child)

Chicken (the modern child is also unlikely to go for pigeons, doves, peacocks, ostriches, flamingos, and the numerous other feathered things the Romans ate)

For the Birthday Cake, you can just stick some little Roman figurines on an ordinary cake, or for more elaborate ideas visit:

Knucklebones: Played the same as Jacks

Chariot Race: Basically just a ‘wheelbarrow’ race for younger kids or a party with a small number of guests, but for older ones and/or large groups you can make it more complex by attaching cords to the waists of the ‘horses’ and let each ‘driver’ have four of them to manoeuvre to the finish line.

Lions & Christians: ‘Christians’ stand within a circle. ‘Lions’ are released, and (without actually attacking Christians) circle round their feet, pawing at them and making menacing roars and growls. See how long the Christians can go without either running (at which point the lions are allowed to chase and tag), or express willingness to abandon their faith. This is more nerve-wracking than you might think. We did this at an OSC Roman programme, and, granted, one of our lions was exceptionally ferocious, but even though most of the kids attended a Catholic school, a surprising number were willing to recant. There was really only one stalwart hold-out (and his daddy said he was very proud of him.)

The Games: Gladiator kids armed with foam swords can fight each other in makeshift ‘arenas’.

Slave Chase: Roman ‘soldiers ‘ chase kids and all who don’t reach a designated place of safety without being caught are ‘sold’ as slaves to those who weren’t caught. They each then have to do something their new owner tells them to do before being granted their freedom. (Reasonable things, like ‘do a little dance’, ‘clap three times’, ‘tell a joke’, not anything dangerous or embarrassing.)

Roman type sports such as races, arm wrestling, and tug-of-war.

← MORE BLATANT SELF-PROMOTION – BUT AT A DISCOUNT
REMEMBRANCE DAY →