HISTORIC EXCUSE: BLAME TITIVILLUS (I DO) 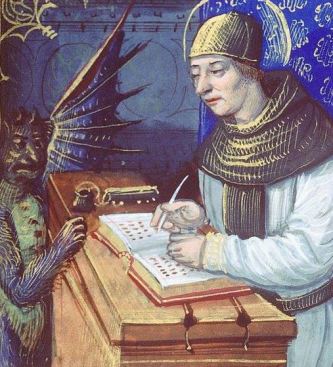 You may, or may not, believe in demons, but being currently engaged in the final edits for Time Rose Book 5: The Volcanic Rose (to be released by BWL Publishing Inc. in November), I, like most writers, believe in this one. (So do editors, publishers, and printers.)

Titivillus, the Patron Demon of Scribes, has been around since about 1285. He was around long before then, too (the Ancient Egyptians and Babylonians had to deal with a similar entity), but it was in 1285 that John of Wales actually referred to him by name in the Tractatus de Penitentia.

Until printing presses were invented, manuscripts were laboriously written out by hand, a task primarily performed by monks. Devoted to the job though they were, a moment’s distraction or a brief period of daydreaming inevitably led to errors in the finished work. But when called upon them, the good brothers claimed it wasn’t really their fault, as it was a well-known fact that, each day, the Devil dispatched a demon called Titivillus to scour the earth for scribal errors. Charged with filling a sack a thousand times before returning to Hell to have them entered against the name of each perpetrator, Titivillus did his best to meet his daily quota of scribal slip-ups so that, come Judgement Day, his boss would have a long enough list against various individuals to be able to claim the careless wretches for Hell instead of Heaven. And since Lucifer wasn’t the kind of guy staff cared to disappoint, Titivillus thought nothing of (mis)guiding the hands of quill pushers, or, if they proved too strong-minded, just popping mistakes into books himself.

And if people didn’t buy that, an accused monk could always say, well yes, he did make an error, but it was a deliberate error because only God was perfect, and to produce a perfect work would mean that he, as a mere mortal, was trying to put himself on the same level as God.

After printing presses were invented, Titivillus supposedly shifted his attention to type setters, who also gave him full credit for any misprints. But that was long ago. Have the word search and spell/grammar check capabilities of today’s computers not banished old Titivillus?

Not a chance. If anything, he’s more active than ever. Ask any writer who opens a copy of his/her latest novel and has missing words, a double ‘the’, or an ‘of’ instead of ‘off’ jump out at him/her. And since said writer, along with an editor, line editor, and several beta readers, have all gone over the final version of the manuscript with a fine tooth comb, it just has to be Titivillus at work. Because it was perfect when it was submitted for publication.

(I personally think the little fiend causes errors to become invisible during proofreading and chuckles with glee when this invisibility cloak is removed and they appear in print to cause writers to writhe with embarrassment and start to rant and rave in self-reproach.)

For more on Titivillus, visit: