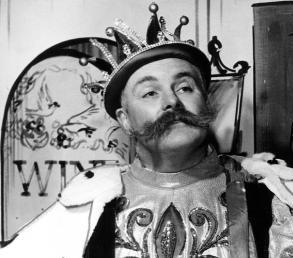 Britain’s Christmas Pantomimes usually begin on Boxing Day and run well past New Year. For those who don’t know, pantomimes are child/family-oriented theatre productions based on well-known fairy tales or nursery rhymes, such as Jack & The Beanstalk, Cinderella, and Puss-In-Boots. Traditional pantomimes have heroes and villains, slapstick comedy, song and dance numbers, and quite a lot of audience participation. There are also role reversals, such as a man playing a ‘dame’, and a young woman playing the male hero. Many feature celebrities in key roles, but lots of amateur theatre groups put on very good ‘pantos’, too.

As with Father Christmas Grottos, people in my little English market town had to go further afield for theatre entertainment, so the first pantomime I went to was at the New Theatre in Oxford. It was Merry King Cole, and starred Jimmy Edwards, of the TV series Whack-O! I went with a Sunday School group and we travelled there by coach. I don’t recall if there was fog going, but there was coming back, and that delayed our return to the market square, where parents had to wait so long, one of the local bobbies came over to ask what they were all doing there so late at night.

If you have memories of Christmas pantos, share them with your children. And if your town, or one near it, is putting on a panto, definitely take them – if only to relive your own childhood.