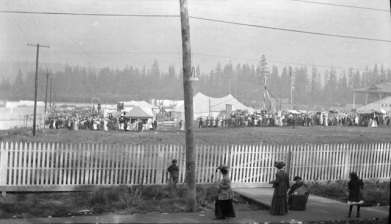 If you’re going to be in or around Vancouver, B.C., Canada towards the end of August, check out the exhibition that’s been held there since 1910. Now known as the Pacific Northwest Exhibition (PNE), it was originally called the Industrial Exhibition and was the second largest exhibition in North America after the New York State Fair. The first one was opened by Prime Minister Wilfrid Laurier and about 68,000 people were willing to pay 50¢ to gain access to the fair grounds. Admission has gone up since, and so has the number of visitors, with upwards of 900,000 people attending the PNE during its seventeen-day run.
http://www.pne.ca/aboutus/
http://www.vancouversun.com/sports/facts/3410150/story.html