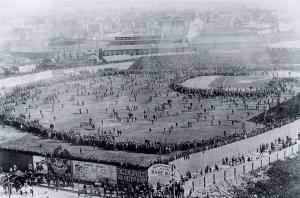 The first official World Series took place in 1903, with the Boston Americans triumphing over the Pittsburgh Pirates. The World Series has taken place every year since, with only two cancellations (one in 1904, the other in 1994). Despite the inclusion of the word ‘World’ the only non-American baseball teams to play in the series have been Canadian: the Toronto Blue Jays, who actually won in 1992 & 1993, and the Montreal Expos.