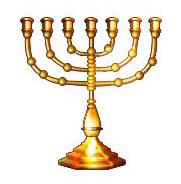 In 168 BC, the Jewish Temple in Jerusalem was seized by Syrian-Greek soldiers and dedicated to the pagan god Zeus. The following year, the Syrian-Greek emperor Antiochus Epiphanes outlawed Judaism and decreed that Jews were to worship Greek gods. This resulted in a rebellion led by Judah Maccabee, and in 165 BC, the rebels (known as both Maccabees and Hasmoneans) defeated Antiochus’s armies and reclaimed the Temple. Having been defiled by pagan ceremonies, the Temple had to be cleansed and rededicated. The Hebrew word Hanukkah, also spelled Chanukah, means “dedication” and the Maccabees rededicated the Temple with a celebration that resembled Sukkot, an important Jewish holiday involving feasting, prayer, and pilgrimage. Centuries later it was recorded in the Talmud that there was very little oil available for the dedication ceremony, but even though what they had should only have lasted for one day of the eight-day celebration, it miraculously lasted for all of them.

Though only a minor Jewish holiday, Hanukkah is a popular one and often falls near Christmas. Modern Jews celebrate by lighting candles on a special menorah, eating foods such as latkes (potato pancakes) and sufganiyot (jelly donuts), singing songs, playing games, and giving presents.